You must login to see topics. If you have trouble, please leave a message in the Guest area.

Join the forum, it's quick and easy
You must login to see topics. If you have trouble, please leave a message in the Guest area.
Would you like to react to this message? Create an account in a few clicks or log in to continue.

I made the mistake of installing iOS 7 Beta 2 on my phone, and now skype won't work.

So perhaps it's better to use this area for discussion.
You can still send me messages via email, IRC, or LSF, but it could be useful to have a centralized area for feedback, thoughts and possible ideas.

Other than that, I think you're headed in the right direction. Add pronunciation and character stroke order to make learning easier. Maybe putting the teacher sprite on the screen instead of just a side image would help too so the player can look at something other than the BG.

I wasn't able to recreate the error with the flashcard staying on screen. Are you still getting it?

Made a stroke order example for あ. It's not impressive visually, but I'm aiming for functionality before I try adding any polish.
Would like to add a chart that shows stroke order to the smartphone too as a reference, but that can come later.

CJ wrote:I wasn't able to recreate the error with the flashcard staying on screen. Are you still getting it?

I continued the lesson after あ ("We'll move on to the next character now..." and chose "Ok").This is on the June 23 build files, which I have not tampered with. Have any of the other testers received this bug?

I ended up getting the bug. It didn't happen before but I played the game again today and the card stayed up in the left corner. I did skip the intro and used the fast forwarding option a few times this time around. I'm not sure if that had some effect.
https://2img.net/h/i1193.photobucket.com/albums/aa349/Googaboga/Screen_zps357f6879.png

Also I have been reading through some of the other topics on the site. They are pretty neat. Do you want us testers to keep up with those/comment on them or just stick to the topics about the Alpha? 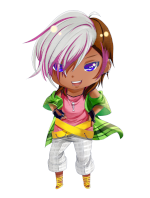 Also, I'll add a very simple card matching activity. Basically you will have to drag the correct Hiragana flashcard on top of the shown Romaji card. Nothing amazing, but I want to start with easy activities first and work my way up. Plus this activity is working already, I just want to tidy it up a little so it's easier to reuse with other cards.

I've also tidied up my code somewhat, as it had become a big jumbled mess, and made it very easy to build
Sorry, no new study content as such. I think by now you'll know why. But it will come eventually.

Anyway, I've uploaded some distributables in the Hiragana Alpha 2 folder in my dropbox. If you could take a look at the card activity in particular, I'd appreciate it.
The one in Lesson 1 is quite limited as there aren't many words that only use the first 5 Hiragana, but at the end of Lesson 2, it's been expanded a lot more.